Discussion of the fruits of the mind!

Pretty big fan of his.
Particularily enjoy "The rats in the Walls" and his poem " A Garden"

We need another Lovecraft based video game.
Top

Very true! "Call of Cthulhu - Dark Corners of the Earth" is the only one I'm aware of, and it was very good despite some undeniable flaws. But it's also high time for a proper film, I'd say. There's a handful of films that are more or less loosely inspired by his works, but none of them ventures into his more complex and subtle themes, the vague yet oppressive sense of cosmic menace of the Cthulhu mythos. I was disappointed by pretty much every Lovecraft-inspired film I've seen - they tend to end up somewhere in the trash corner where they may not be bad, but not what I'm looking for, either. The only noteworthy production I've come across is the short animation film "At the Mountains of Madness".
Sidetrack Walker - Dark Pop for the faint of heart.
Top

d.mimøsa wrote: The only noteworthy production I've come across is the short animation film "At the Mountains of Madness".

I recommend the HP Lovecraft Historical Society - they did a rather splendid version of The Call Of Cthulhu
(http://www.amazon.co.uk/The-Call-Cthulh ... of+cthulhu). The making-of film where they describe building a cardboard R'lyeh in the director's back garden is just outstanding, too.

What can I say... He's one of my all-time favourite authors (not only of Horror fiction), I've read everything by him translated in Bulgarian and I'm planning to read him in original too. Every word said for him would not be enough, so I'll just say that my favourite stories are Call of Cthulhu and The Dunwich Horror. Matchless level of literary virtuoso excellence, an eerie mind which didn't belong here...
"...for although nepenthe has calmed me, I know always that I am an outsider, a stranger in this century and among those who are still men..." (Lovecraft)
Top

I like a lot of his stuff but only got into it about 2-3 years ago. I figured I was listening to music influenced by his works and should therefore give it a go. It's probably one of the reasons I started reading the Hellboy comics. Mignola was very influenced by Lovecraft.
http://www.facebook.com/pages/Nevertanezra/163179627054889
https://nevertanezra.bandcamp.com/
http://www.youtube.com/user/NTNR1

"It's angry at the room, mom, it wants the room to suffer."
Top

Over 20 years ago I was deeply into his work.
Fun fact: Nowadays I sometimes think that his “great old ones” in real are “small young ones”, regarding my impressions from my microscope

Life is a mouth only death can feed.
(J. H. Fabre) 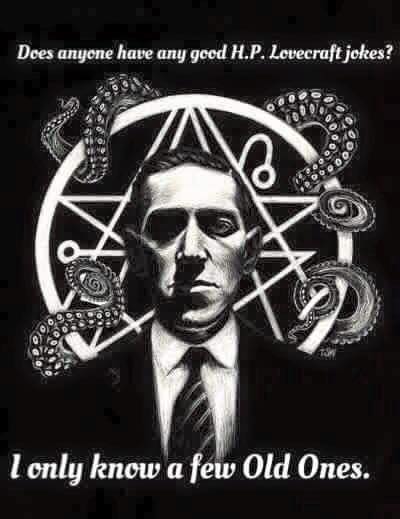 I always thought it was a bit sad that Lovecraft only was seen as a „cheap“ horror author while Poe gained many respect.

When I once had to write a detailed essay I wanted to deal with Lovecrafts work but my teacher said that he only was a dime novelist and I rather should take someone like Poe. I wanted to work on the expansion of the limits of imagination, and Lovecraft’s work was much more suitable for that because he describes things beyond ordinary experiences, like theoretical physics also deal with things you cannot imagine. Therefore I was really disappointed when I saw a picture of Cthulhu where he just was drawn as any other simple fantasy figure, with four legs and a head and a tail and so on. To me that was indeed dime-novelistic but not fantasy.

There seems to be a time before Tolkien and after him. Until 1930 Fantasy was the name of literature that had an experimental psychological component but after „Lord of the Rings“ such experiments were classified as „horror“ instead. I like Tolkien, but it is sad that the long descriptions of political themes get called „fantasy“ just because elves and dwarfs are involved. I do not want to sound offensive, but that´s a bit narrow-minded. To describe a world far beyond everything that belongs to our world is fantasy, not unicorns and elves and all that.
Life is a mouth only death can feed.
(J. H. Fabre)

Recently I had a talk with an artist about Lovecrafts world. Often within Lovecrafts tales there are mentioned secret cults, lost villages, forgotten temples, unknown places. Nowadays in this world of Google Earth and social networks not much stays secret and lost and unknown very long. Maybe the “new” boom of his (and similar) writings (nobody was interested in his tales a long time) also shows the longing for a bit more unexplored mysteries that make the world more interesting – more Innsmouth, less Street View.
Life is a mouth only death can feed.
(J. H. Fabre)